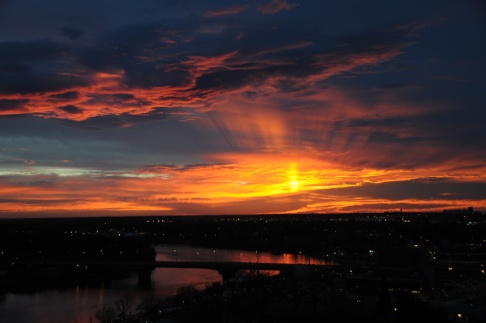 After living in the condo for about 5 years, I have witnessed hundreds of beautiful sunsets.  Last night I sorted through over 200 photos of these sunsets that were taken over the course of these 5 years.  There were difficult choices to make but eventually I narrowed them down to just over 100 and I’m pretty sure I will up that amount again within the year.

My last domicile was a small bungalow located in the Avalon area (anyone from Saskatoon would know what I’m talking about).  A mature neighborhood with lots of trees, straight streets with back alleys, and rows of same type bungalows with L-shaped livingrooms.

Our front window faced the west and a few times a year I could see the edges of a beautiful sunset.  Touches of pink, orange and gold and I would admire what little I saw.

It wasn’t until living in the condo with windows facing the south and west that these sunsets appeared more often than I thought.

The ones I love the best would have scattered clouds and the sun is setting behind the river.  These would occur during the spring and fall.  They are constant changing patterns and they come and go within minutes.

This picture was just about missed.  I had checked all the conditions and felt it was going to be a beauty.   After observing the skyline for a short length of time, I gave up hope as darkness was falling and nothing was happening.  I turned myself away for only a few minutes and then this appeared.  It lasted just over two minutes and it was gone.